The validation is performance, demonstration of any procedure, process, equipment, material, activity or any system performance as expected under given set of condition. In the most basis form, validation is proving that the performance is as intended. When extended to an analytical procedure,depending upon the application, it means that the method works reproducibaly, when carry out by same or different persons, in same or different laboratories, using different reagents, different equipment, etc.
The analyst normally tends to assume that if an analytical method or process performs reproducibility in an limited number of experiment, it will continue doing so forever, which is too optimistic to assume.
The Benefits: The biggest advantage of method validation is that it builds a degree of confidence, not only for the developer but also to the user. Although the validation exercise may appears costly and time consuming. It is results in expenses, eliminates frustrating repetition and lead to batter time management in the end. Miner changes in the condition such as reagents supplier or grade, analytical setup, environment condition or the analyst, are unavoidable due to obvious reasons. The method validation is expend the shock of such condition and pays for more than invested on the process.
One has ti realize that like CGMP, the advantages of method validation are more for the pharmaceutical manufacturer and quality control laboratory as compared to the regulatory authorities.
Key Parameters: It is important for one to understand the parameter or characteristics involved in the validation processes. Only after this basis understanding is developed, one can fully comprehend the validation method. The main parameters, which are performed in a method validation exercise are given below.

The closeness of the average value to the target or standard value is defied as a accuracy. OR How close the observed value is to the expected value. 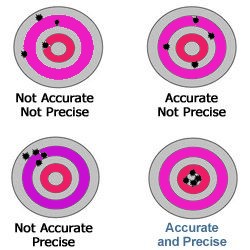 Accuracy is termed as "trueness" of the method i.e. the procedure should be able to determine exactly the same amount of analyte as contained in the sample to be analysed or add (Spiked) to the sample intentionally for the purpose.  The accuracy of analytical method is the closeness of the test result obtained by that method of the true value. In a true sense accuracy is linked to "recovery". If 5 mg of drug is contained in a tablet and method is able to determine exactly same amount, the method can be said to be 100% accurate.The recovery in such a solution is also 100%.In case of complex matrices, like drug in biological fluids or in formulation, the accuracy is denoted by extraction efficiency.
When the accuracy (recovery) experiment is carried out several times on the same sample, then the degree of closeness in the determined replicate values represent the precision of the method.In other words, precision provides and indication of the random error associated with replicate analysis.
Precision, How closed the observed value is to the each other OR The closeness of individual values to each other.

These two are the attributes of precision, repeatibility is a sample situation and gives the degree of precision obtained when the method is replicate in the same laboratory within short intervals and in the same conditions. It is determine by making an estimate of "coefficient of variation" or relative standard deviation (RSD) which is calculated is following formula:
RSD= S/X*100
Where S is the standard deviation and X is mean or average of n measurement. The RSD value are impotent for shoeing of degree of variation expected.When the analytical procedure is repeated several time in a similar situation.
Reproducibility represent precision obtained under variations in conditions of assays such as different analysis, equipment and reagents, laboratory and days. Practically speaking, it involves a number of repeatibility experiments conducted under different circumstances.
The degree of precision is usually less when the method is tested in different laboratories, between run and between days as compared to when it is tested in the same laboratory, within run and on the same day.

Linearity is the efficiency of the method which is get test results that are directly proportion to the analyte concentration within a given range.The linear range of detectability that obeys Beer's law is depend on the compound analysed and the detector used. The working sample concentration and samples tested for accuracy should be in linear range.
The range of the analytical procedure is the interval between the upper and lower concentration (amount) of the analyte of the sample (Including these concentrations) for which it has been shown in the analytical procedure has a suitable level of precision, accuracy and linearity.
For example: If we are measure absorbencies of seven standard solutions (concentration of 20,40,60,80,100,120, and 140 mg/ml)  of drug and plot the absorbance versus concentration, a linear or non linear relationship may be observed. If the plot is linear over the concentration limit of 20-100 mg/ml, the method is linear over the range. In this example that method can be used for analyses of know sample in the range of 20-100 mg/ml.

Limit of detection (LOD) and Limit of quantitation (LOQ):

These parameters have assumed impotence as more stress is now being paid by regulatory authorities on estimation like trace impurities in a bulk drug sample, degradation product in a finished products or a drug or its metabolites in biological fluid. A concentration at which one can be fairly certain that the compound is present is know as limit of detection (LOD). What is means that concentrations below this may not be detected while concentrations above this limit are almost certainly detected in analysis. The limit is usually expressed in terms of mg/ml, pg/ml, go/ml etc. It need be understood that LOD values are always specific for a particular drug, a particular analytical method and particular set of experimental conditions. Something is changes the sensitivity  of method, including instrument, sample preparation, etc. will change the detection limit.
One needs to be clear that LOD by definition encompasses both instrument detection limit (IDL), and Method detection limit (MDL). IDL is the lowest limit that the instrument can detected and is based on samples which have not gone any samples preparative. MDL is similar to IDL, but is based on samples that have gone through entire sequence of sample preparation prior to analysis.
The limit of quantification (LOD) on the other hand is the lowest concentration of an analyte in a sample that may be measured in a quantitative manner, which an acceptable level of accuracy and precision describe under the operating conditions of the method. This will happen always higher than LOD, by almost 3-10 times. The LOQ also varies with the type of method employed and the nature of the sample.

If analytical procedure is able to separate and resolve the various components of a mixture and detect the analyte qualitative, the method is called selective. On the other hand, if the method determines or measured quantitatively the component of percent in the sample matrix without separation. It is said to be specific. Hence, one basic difference in selectivity and specificity is that, while the former is restricted to qualitative detection of the components of a sample matrix, the latter means quantitative measurement of one or more analytes. The other difference is that selectivity generally applies to a separative method whereas specificity is applicable even to a non-separative method.
The ability of specific non-separative method of distinguish between different compounds in the reason that specificity is considered an ultimate of selectivity. The titration methods are good examples of specificity, where despite absence of separation, the analyte of interest is determined specificity through the presence or absence of titration function groups. The sample is the case of UP Method that ca also specific if there exists in difference in UV spectra of various compounds in the mixture,The chromatographic methods, however can be both selective and specific as the components can be separated as well as determine quantitatively.

These parameter are drive from the two precision attributes, repeatability and reproducibility, discussed above. While the robustness is linked t repeatability, the ruggedness is established through the check of reproducibility. Robustness means that the method is repeatable when intention variations are introduced in the parameters internal to the method. The variation here may be change in reagent concentration, use of different analyte wavelength, use of different dilutions, change in coloum of the same type, small changes in mobile phase etc. The method, on the other hand, is said to have sufficient ruggedness when it is proved to be reproducible under the influence of external factors.
Robustness testing is normally restricted to methods that are to be used repetitively in the same laboratory. For such method it is, however, useful to test also for small amount of ruggedness to account for situations, like a sudden change in the operation, non-availability of a particular brand of reagent etc.
The testing of ruggedness is generally suggested when the method is to be used in more than one laboratory. For method developed for use on a winder scale, intensive testing for ruggedness is done through collaborative studies involving a number of laboratories. Reports of such collaborative studies appear from time to time in JAOAC or other journals reporting analytical methods.
It may be pertinent to add here that the terms, robustness and ruggedness have been used interchangeability in past. However, the trend is changing recently and the two terms are being defined and classified separately.

Popular posts from this blog

To determine loss on drying (LOD)